Recently, there have been more and more discussions about recyclable flexible packaging. Polyethylene single material is an indispensable part of recyclable flexible packaging options, and MDO film is an important technical direction for polyethylene single material packaging. Let’s talk about it today. Let’s talk about MDO related technologies, applications and materials.

The full name of MDO is machine direction orientation, which is a post-extrusion process used to increase the orientation of the film in the MD direction, thereby improving the stiffness, optical, and barrier properties of the film. MDO stretching equipment is completed by four stages of preheating, stretching, annealing and cooling 8-12 rods.

There are two types of MDO machines, online and offline, and online machines are currently the mainstream choice. Because the film is stretched in the offline state, the film is thin in the middle and thick on both sides, which is more wasteful in use; the online machine can measure the thickness and feedback to the film making system, so that the film thickness after the stretch is more uniform and reduces cutting side.

2. The change of PE film performance after MDO

The following model diagram illustrates how the crystal structure changes as the film stretches before the critical stretch ratio. The unstretched film has lamella of different sizes and is freely oriented (Figure 2A); the stretched film forms smaller crystals and the molecular segments are oriented in the MD direction so that the MD direction crystallinity becomes higher ( Figure 2 B). 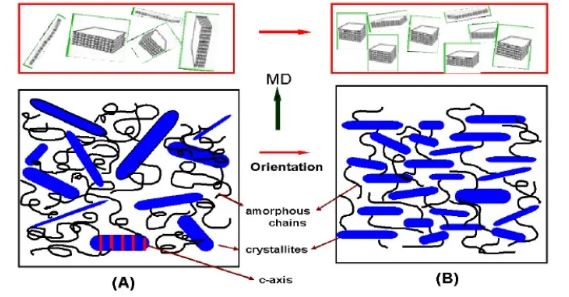 After the critical stretch ratio, the molecular chain is further stretched in the MD direction, and the lamella structure is stretched to form a mutton string-like crystal structure [2]. Because of the changes in molecular morphology during the stretching process, the macroscopic properties of the film have been improved. It is summarized as follows:

The optical properties of the film include haze, gloss and transparency. The optical performance is closely related to the surface flatness of the film and the size of the internal crystals. In the MDO stretching process, the film is softened, stretched and then cooled, which itself will make the surface flatness better; secondly, smaller crystals will be formed during the stretching orientation process; these two factors make the optical properties of the film as the film stretches. The ratio increases until it reaches the critical value.

There are other properties of the film not-analysis. The following table is a summary table of the impact on film properties when the MDO stretch ratio increases within the critical stretch ratio range. 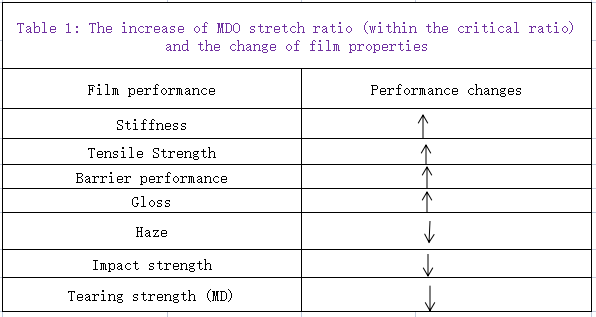 Since the stretched PE film has the advantages of high stiffness, high heat resistance, high tensile strength and good optical properties, the MDO stretched PE film is used in a single material package to replace the previous PET or PA surface layer. 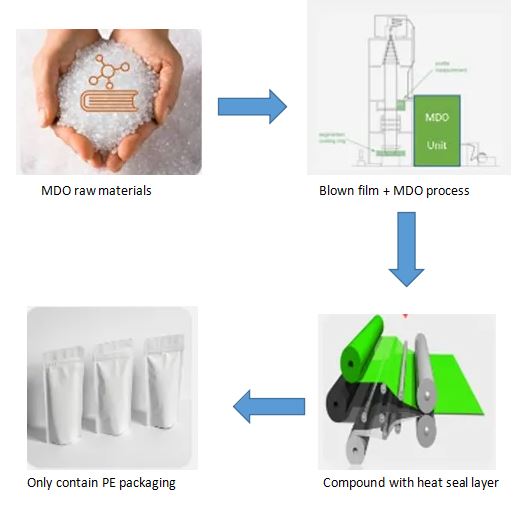 The selection of MDO stretched PE raw materials is mainly considered from three factors such as stretchability, heat resistance and crystal point. Unlike BOPE, which needs to be biaxially stretched, MDO stretched PE only needs to be stretched in one direction, and the stretch ratio is about 5-7. Most linear products on the market (LLDPE, HDPE) can meet this requirement. Raw material manufacturers nor will it redesign the molecular structure and develop new grades for this process; heat resistance is closely related to the initial density of the raw materials. The grades recommended by the raw material manufacturers are mainly HDPE and MDPE (Table 2); crystal point control is related to the control of the raw material production process. The majority of users can distinguish themselves during use.

The mainstream formulation design of MDO film is mainly based on three layers. With the popularization of five-layer online MDO machines, there will be more and more five-layer formulas. The design idea should be combined with the machine processing situation and the final use scene of the film. If it is a lightweight flexible packaging, you can consider using HDPE to maximize the stiffness and heat resistance of the film under the conditions allowed by the machine; if stretching occurs The uneven situation can be solved by the combination of HDPE+MDPE; if it is a formula with a balance of stiffness and toughness, then the combination of HDPE+mC6/C8/mC8 LLDPE is needed. The addition of HAO can greatly improve the film The toughness is especially the impact strength and puncture resistance. The choice of LLDPE here is more particular. If you choose C8LLDPE, the stretched film will eventually show the effect of easy tearing in the longitudinal direction and difficult to tear in the transverse direction; if you choose C8mLLDPE, the tear strength of the film will increase overall, but the longitudinal tear strength will be shown. Much greater than the phenomenon of transverse tear strength. You can decide the film formula combination according to the final use scene of the film.

The design idea of the heat-sealing layer PE film is mainly to reduce the heat-sealing temperature, and to increase the temperature difference with the MDO PE film as much as possible to ensure a wider heat-sealing window and a good heat-sealing effect during heat-sealing. The recommended raw material is VLDPE (density 0.905-0.915g/cm3) or POP (density 0.880-0.905 g/cm3). It should be noted that the density of VLDPE and POP is low. In the actual film blowing process, too much viscosity may cause difficulty in opening the film. At this time, the inner film needs to be blown outside or an additional opening slip agent needs to be added. The slip agent will migrate. If it migrates to the composite surface, it will affect the overall composite strength of the film. This is also a factor that reflects the low composite strength of the MDO film on the market; it is necessary to find a balance between the selection of raw materials and the amount of slip agent added to optimize the formula.

Polyethylene single-material packaging technology is still developing vigorously. In addition to MDO, there are also BOPE, multi-layer co-extrusion containing barrier materials, high barrier/heat-resistant coatings and other technologies;Chengde combining with independent invention patented polyethylene filmand the developed MDO polyethylene film, Chengde have realized the exquisite transfer of PE patterns in the field of gravure printing. At the same time, combined with the special treatment of the membrane surface, the newly developed HMDO product can achieve HIGH BARRIER and perfectly solve the bottleneck problem of a single polyethylene material in the shelf life of customers' products, which can enable customers' products to have a longer shelf life.